Grath Helgerud recently shared a very moving account of his story as it relates to the communities that now inhabit the regions of Seeking Wisdom and Qoheleth. In this article, I hope to supplement that excellent piece with a history of the actual land where we have lived.

My own personal history in Second Life goes all the way back to 2003 and my first avatar. That is the year that Second Life was created, and I was one of the very first avatars. I still have that avatar, though I seldom log in as him. After playing for some time, I took a long break from Second Life. When I returned in 2006, I decided, as many do, to make a fresh start with a new avatar. His name was Columba, after the 6th century founder of the community on the island of Iona off the coast of Scotland, one of my favorite places.

Upon my return I was intrigued to hear that an Anglican Cathedral was being built on Second Life. I attended the opening service on July 15, 2007 – that’s me, Columba, in the white hair and the typically Anglican blue blazer. At the time, I thought that cathedral was the most beautiful building I had ever seen in Second Life.

I noticed that there was property for sale right across from the cathedral. So I bought a small piece of land there, and put up my first house, a small hut (which, by the way, is still sold by Barnesworth Anubis). I named my place Iona. This was located about where the entrance to the Chinese Garden is now.

I was excited about my virtual real estate find and mentioned it to one of my friends in real life. Shortly thereafter, he also created an avatar in Second Life: Grath Helgerud. When the plot of land next door to mine became available, Grath purchased it, and we became neighbors.

At that time, most of Qoheleth was an ecumenical center called QUILT (Qoheleth University of Interfaith Learning and Teaching), with educational exhibits about various faith groups.

My contribution was an oratory devoted to contemplative spirituality.

The only artifact remaining from that time is the Frank Lloyd Wright-inspired building where a UCC congregation still meets, on the neighboring island of Xenia.

In time, I moved to another region, and sold my land to Grath for L$1. His holdings began to expand as he bought up more and more parcels on Qoheleth. Eventually he owned about a third of the region. During this time, the Psychoanalytic Round Table group began to meet on Qoheleth.

A year later, Memorial Day weekend of 2012, Markings Dreamscape purchased a full region with the intent of creating a community of people who enjoy integrating art, intellect, sexuality and spirituality. The sim was named Bondage at the time he purchased it, although BDSM was never the focus of activity there. Once again, Camryn Darkstone was called on to build out the sim. At the time, the people involved were very interested in myth and archetypes. There was one large pseudo-Asian palace on the sim, but Camryn designed most of the buildings in Roman style to accommodate the many Greek and Roman paintings and statues that Markings enjoyed.

Shortly after completing the Roman build, Camryn retired from Second Life to move to Opensim. At her request, I stepped in to fill the gap, creating a new avatar to help manage the new sim on behalf of Markings’ group, which he named Soma. At the time, my intention was for this new avatar to be just a “bot” and not an actual person. So instead of giving myself a real name, I chose the name “SomaGroup” to reflect my avatar’s utilitarian purpose. Little did I know that I would eventually inhabit this avatar so richly!

To better reflect its character, the name of the region was changed from Bondage to Soma.

In the summer of 2014, Grath acquired another large section of Qoheleth, and the Refuge for Peace was born: a sprawling forest designed to house a community for sharing our lives and to live in harmony with each other and this world. All were invited to come for a walk in the woods, sit by a stream, meditate, contemplate, or just chill.

The following year, in the summer of 2015, saw big changes. On August 10, the Soma sim was closed forever. The Psychoanalytic Round Table group moved back to Qoheleth, to the Stone Circle where it still meets, and is about to begin its 12th year.

For a few months, all our activity took place on Qoheleth. Then in November, I received a surprise message. Grath had acquired another region! It was located next to Qoheleth, and he named it Seeking Wisdom.

At first, we recreated former buildings from Soma on Seeking Wisdom. But Grath was searching for a unique identity for the new sim. I could hear the wheels of creativity turning. In April of 2017, he shared a vision with me, of a large park based on the work of the great landscape architect Frederick Law Olmsted, famous for building Central Park, Golden Gate Park and many other famous city parks. Olmsted created the concept of public parks accessible to everyone, regardless of social status. In the mid-19th century, when most parks existed only on the private estates of the wealthy, this was a bold new idea. Grath asked me to create a park on Seeking Wisdom in the style of Olmsted. It came into being during the summer of 2017.

We welcome everyone to our park, where you can relax and enjoy solitude, contemplation, conversation, or a snuggle with a lover. The community that has grown from its beginning on Qoheleth in 2007 now has two regions in which to celebrate our friendships and the sharing of understanding.

The renewed — and ever-renewing — vision for Seeking Wisdom and the Refuge for Peace reflects the character of our community. It continues to grow and evolve (with new regions), yet it remains grounded (11 years on Qoheleth). Instead of abandoning the past, we are transforming it, to create a new, integrated and authentic future for our community.

Daimôn: a benevolent guardian spirit believed to confer protection and good fortune on those offering their respects. I manage the rental properties that support the work of the groups on Qoheleth, Refuge for Peace and Seeking Wisdom. View all posts by Daimon Silverdragon

4 thoughts on “A History of Our Land”

Visit Us in Second Life 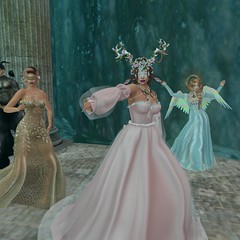